A throng of quiet chanters walk carefully around a well, their umbrellas flowering in the grey rain. They circle the still, deep well humming together, moving at a measured gentle pace. Encountering and communing, linked by the thrumming breathe of song.

Our stories are European stories, the ones that came with our people whenever it was they came here. We don’t, generally, have a clear understanding of other cultures outside that canon – although perhaps we occasionally dip in to other cultural myths and constructs and become captivated by them. When Penny went to Korea she was suddenly immersed in an experience well out of her comfort zone, yet found people to engage with and befriend as well as encountering new stories and spirituality.

Its almost as if there are multiple parallel intersections of life lines. The formal approved spirituality of a nation, and the other spiritualities that run alongside it. People engaging with their own world of the soul, the pneuma. In a western context that seems to emerge in a sort of vague paganism of sorts and similarly in South East Asia it also seems to be animistic and attuned to nature.

This encounter has thrown into the series of works, here, some clear references to the women chanting around the well, but has also brought in some of the numinous into the local Tasmanian environment. Glimpses of bush, mysterious, inchoate and blurred race past us, or a flying colourful clothesline backlit by deep bush, remind us that often within metres there are almost impenetrable spaces, mysterious and dim. The bush here is not cultivated. Stand still in a garden up in the hills and the reality of cool dark understories are immediate. In winter its cold, frost-rimed; brief spring is lush and heavy green, and in the heat of summer there is the dry menace of fire immanent in every crackling scrub. Watchful spaces. Not necessarily friendly spaces. Sometimes welcome oases of tangled mossy bowers.

“I am delighted to be exhibiting with these amazing and diverse painters at Despard galley. Please join us for the opening 5:30pm June 25th.
Additionally Ochre Lawson and myself will be giving an informal artist talk about our work and practice on Saturday 29th June, 11am. We would love your support.”
please click below to visit online catalog and more details
https://us3.campaign-archive.com/?u=6b0b7f671b14ad5b61bfc0f9c&id=cb8b8e0afb

Despard is proud to present BOTANICA, a group exhibition that brings together a diverse group of women artists, each exploring the magic and intrigue of the botanical world.

Women artists have been the subject of varying degrees of critical attention and neglect throughout history. It is an established fact that galleries in general represent more male artists, promote their work more vigorously and sell it for higher prices.

Five years ago, with the assistance of the Bett Gallery, 24 Tasmanian women formed the Artemisia Collecting Group. Recognising a gender imbalance in the arts, they decided to focus their collection on women artists. Together they have amassed an impressive collection of 31 artworks – all by Australian women artists whose work is nationally and internationally recognised.

This exhibition presents an exciting opportunity to see this collection as a whole for the first time. The exhibition shows work by Tasmanian artists, sitting alongside the work of contemporaries from around the country.

The collecting group chose the name “Artemisia” acknowledging the 17th Century Italian painter Artemisia Gentileschi, regarded as one of the most accomplished painters in her generation at a time when female painters were almost unknown. The Artemisia Collecting Group hopes to inspire more Tasmanians to enjoy and explore art, and most importantly, to support more women artists.

Join members of the Artemisia Collecting Group for Conversations. This is a free, casual event where you discover more about the artworks exhibited, and find out about the collecting group, how they work and why they feel it’s important to collect art.

link to press release below

It’s a big ask in some ways to articulate so early what the experience is like of being immersed into a totally different place, climate, cuisine, toilets, language and different expectations. Disorientating obviously, but after a while you begin to see it’s also same- same… but different.

Jeju is a tiny island (1,845.60 km2) in comparison to Tasmanian (68,401 km2) but it is crammed full of amazing and diverse nature. It has a site-specific and rich culture with a deeply mythological origin, coinciding with a more recent 20th-Century traumatic and transformative history.  I found the people (and of course I generalise) to be resilient, hard working, gentle and generous. Central to the island as well as central to the culture is Mount Hallasan. At I,950 meters above sea level Mount Hallasan is the highest of Korea’s three “Soul Mountains”. Mount Hallasan is visible from all aspects of the island, a dominating presence and influence.

The residency caused me to reconsider the concept of what constitutes natural or indigenous to place, versus what is exotic, and how that difference is determined.  In Jeju I focussed on the many gardens and nature trails, and underpinning this is the volcanic origins and structure of the island. It’s been strange to walk on mountain trails that are hemmed with hydrangeas and royal azaleas which give the appearance to be more like parklands than a UNESCO World Natural Heritage site. This is because my measure of natural and exotic is founded is Tasmania not Korea. Here I’m the outsider, and my perception is limited and dare I say superficial. It’s only when I dig a little deeper I found that these natural cycles, such as the deep-red royal azaleas blanketing Mt Hallasan, are key to understanding the local culture and people.

Once upon a time there lived Seolmundae Halmang, a huge creation goddess of unimaginable strength. This mystical grandmother shovelled huge mounds of earth and in only seven tosses of her shovel created Mt. Halla. Jeju’s 368 oreum were formed with the dirt that fell through her tattered skirt.

Seolmundae Halmang had 500 sons and one day, while all her sons were out hunting, she accidentally fell into a gigantic pot of soup she was making to feed her family. When the sons returned home, they hurriedly ate the soup, not knowing what had happened to their mother. Upon realising they had eaten her, they cried bitter tears of grief and were petrified into rock. Their blood and tears imbues the deep red of the blooming royal azaleas every spring.[1]

This is just one of the many layers of understanding of place I’m just catching a glimpse of.  The depth of connection with Jeju as a Place is not one I can grasp in 6 weeks.  The other artists in the residency program, who became my home away from home family, are all there for a minimum of 3 months, most are there for 6 months, and IAa’s first residency program was a full year. I can understand now the need for that quantity of time, yet time is a privileged and costly investment.

In Jeju I am constantly reminded that I’m the outsider, every time I ordered a meal it’s a new adventure, I point to symbols on a wall, hopefully in my price range. Something sizzling is usually brought out 10 minutes later accompanied with soybean paste, kimchi, maybe a clear soup, seaweed, salty dried little fish, chillies and raw onion.

I still have very limited understanding but my initial feeling or impression is that there is a slow burning optimism weathered with sorrow and great appreciation of nature here. The environment and caring for the island is a high priority for the Jeju Special Self-Governing Provence. The rubbish system, although somewhat daunting at first, is amazing.  They don’t service household rubbish bins but instead have rubbish collections stations, one in about every third street.  Opening between 3pm to 4 am daily the public self-sorts into different categories of rubbish (Plastic/Paper and non-burnable items/Paper and Plastic wrapper) that can be thrown on certain days of the week.

Glass bottles, metals (cans) and styrofoam can be thrown out any day and they have separate bins. The tricky thing is kitchen scraps, they are quite specific about what can go in these bins as they go to some giant composting centre so no meat or bones etc. This you take out in a little plastic bag and it gets weighed, you pay by the weight very minimal charges. Burnable rubbish goes in a special blue and white bag and I think you can take that out any day, I haven’t tried that yet.

The long and the short of it is they have dramatically reduced the general waste of the island and increased the recycling levels; the streets are relatively clean and there is a real consciousness of environmental impact. Admittedly there is a bit of tension with the blatant waste the tourists and developers generate, so this is an area still being addressed, but overall the amount of landfill has been dramatically reduced since this program was introduced.

On a creative level its hard to say what the impact of this time in Jeju will have.  I know on a personal level it has been huge. I’ve never done a residency before – let alone one that is so culturally different and difficult to communicate. This has really opened my eyes and my heart to the marginalised and the outsiders within our own communities. I have such a new respect for our international students, refugees and even tourists, and empathise with their challenges and now recognise how brave they are. There are so many things until now that I have taken for granted, like reading a menu or knowing what you are purchasing in a supermarket. So, I’m thinking about how comfortable I am: comfortable with my own culture, my own environment and how can I make that more inclusive to the ‘other’ or ‘the outsider’ who is unfamiliar with our societal nuances.

I’m also thinking about how this new empathy affects the way I paint. After years of research and specialisation I have become very narrow in some respects in my painterly language. Admittedly that’s part of the development, but I wonder if I have become so immersed in my own culture I have alienated. I realise I’m being a bit philosophical but I think that’s the beauty of a residency, it’s a pressure cooker where all these things get thrown together and you have a moment to disrupt the norm, re-evaluate, question and try and work out what on earth you are going to eat for dinner.

“This project was assisted through Arts Tasmania by the Minister for the Arts”.

The Oxford Dictionary defines rambunctious as uncontrollably exuberant, even unruly.  I have interpreted the theme “Our Island Inheritance” as a reflect of this – turbulently active, wildly boisterous, complex yet also commandingly beautiful.  This work, Rambunctious brings together a cacophony of energetic marks into the unifying round form. Rambunctious doesn’t illustrate a set vista but rather offers the viewer a portal to reimagine our future. 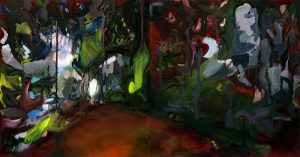 Despard presents their first solo show of Tasmanian artist Penny Burnett. Her paintings focus on our relationship with space and nature. Penny uses the motif of the garden to expose tensions between nature and culture, authority and agency, she brings the viewer’s attention to the act of observing. With a recently completed PhD under her belt, The Evolving Garden, represents Penny as a distinctive contemporary painter.

Next showing of work will be at Despard Gallery’s

Where Despard is celebrating 30 years of representing contemporary art in Tasmania with a Salon Style hanging.

Please join us Wednesday 13 December at 5.30pm to celebrate!